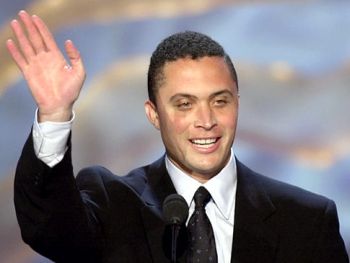 Harold Ford Giving the Keynote Address at the 2000

In 2000 at the National Democratic Convention in Los Angeles where Vice President Al Gore, Jr., won the Democratic Nomination for President,  fellow Tennessean,  Congressman Harold Ford of Memphis, gave the Keynote Address.  That address appears below.

I am honored to speak tonight before a convention that will nominate the favorite son of my home state to be the next President of the United States.

I recognize that I stand here tonight because of the brave men and women– many no older than I am today– who were willing to stand up, and in many cases sit down, to create a more perfect union.

But I also stand here representing a new generation– a generation committed to those ideals and inspired by an unshakeable confidence in our future.

In every neighborhood in my hometown of Memphis, and all across America, I see young people tutoring and mentoring, building homes, caring for seniors, and feeding the hungry.
I also see them using their entrepreneurial spirit to build companies, start non-profits, and drive our new economy.

We stand at this magnificent moment with the ability to unleash the American imagination.
I say to all those of this new generation and to all Americans who share in our spirit: if you want a future that belongs to you- if you want a future that is for everyone- then join with us to make Al Gore and Joe Lieberman the next President and Vice President of the United States.

We know there are some people who do understand the future, but too often as they gaze to the distance, they fail to know how, to make sure that it serves all of our people.

And then there are others who fight tirelessly for the people, but who don’t see beyond the horizon.

Al Gore is the rare leader, who both has a vision for the future, and understands that we can only realize its full promise when all our people share in it.

I remember meeting Al Gore for the first time.

I sat across from him at my family’s kitchen table back home in Memphis.

As often was the case, my brothers Jake, Isaac and I were right where we wanted to be- right beside our daddy as he discussed the issues of the day.

It was a time when, on the heels of Vietnam and Watergate, young Americans were turning away from public service.

But Al Gore didn’t turn away.

He jumped feet first into public life and was elected one of Tennessee’s youngest congressmen ever.

That’s when he became my role model.

As a young Congressman, Al Gore didn’t waste any time.

He held some of the first hearings investigating global warming and its affects on our environment, our health, and our economy.

At the height of the Cold War, when those on both sides of the aisle were stuck on how best to bring peace and security to America, Al Gore, at the age of 34, offered a comprehensive strategy to reduce the threat of nuclear war while keeping America safe and strong. Both superpowers took notice, and Al Gore helped change the debate.

You know, I was only 4 years old when I cut my first political ad.

I got on the radio and told the people of Memphis that they should support my daddy because he supported an improved economy and lower cookie prices.

Even back then it took real money to put that commercial on the air.

While I recognize the importance of political advertising– and I still have a sweet tooth- I feel passionately that we must reform our system if we truly want to engage my generation in American politics.

Some pose for reform in photo-ops, but Al Gore is ready to sign a campaign reform bill his first day in office.

The choice before us- a choice that weighs heavier on my generation than perhaps any other- is what kind of America will we have, not in four years but forty years.

Will the amazing advances of tomorrow be fenced off for the few- or will they be tools for all of us to build better lives?

At this critical time, America needs a leader with the intellect to understand the complexities we face.

A leader with experience who can grasp the challenges of our world.

I remember the fear many of my college classmates in Pennsylvania faced when we graduated eight years ago.

For many of us, finding a good job was tough.

Well, eight years and 22 million jobs later, the future is something to get excited about again.

But some in the other party would have us go back.

Back to a past where prosperity touches only the well-off and well-connected.

Back to a past where children learn from outdated textbooks and parents can’t scrape together the money to send their kids to college.

Back to a past where polluters write our environmental laws.

Back to a past where politicians run up enormous deficits, run factories out of business, and run the economy into the ground.

We have a very different vision of the future.

Al Gore and Joe Lieberman believe the future is for everyone.

Imagine a debt-free economy so strong that everyone shares in the American Dream.

Imagine a healthcare system where every American receives the medicine they need, and where no senior is forced to choose between buying food and filling a prescription.

Imagine a society that treats seniors with the respect and dignity they deserve, and where Social Security and Medicare are strengthened, not only for our parents and grandparents, but for our children and grandchildren.

Imagine a nation of clean coastlines, safe drinking water, pristine parks, and air our kids can breathe as they play in those parks.

We all recognize that no issue is more critical to our nation’s continued success than how we educate our kids.

If we can find the will and resources to build prison after prison, then we can build new schools, reduce class sizes, connect every classroom up to the Internet.

Surely we can pay teachers what they are worth- surely we must hold schools accountable for results.

Imagine giving all our kids the world-class education they deserve.

Well, it is time to stop imagining.

So, tonight I call on all my reform-minded Republican and Independent friends to join us in our crusade.

To join us in making this bold imagination a reality.

When I first decided to run for Congress in 1996, many political insiders said I didn’t stand a chance.

In my first campaign, I wanted to meet with every important group in my district, but as a newcomer I didn’t get as many invitations as I’d hoped for.

But one place I was welcomed– a place where I grew as a candidate– was at kindergarten graduations.

I spoke at more kindergarten graduations than anyone in my district knew existed.

Thirty, to be exact.

I continue to attend kindergarten graduations to this day.

As I see the pride in the eyes of those 5-year-olds and their families… well, to me, it’s just magical.

For those children and their families, we must continue working for a better life and a better world.

Now, as we turn our attention to the choice at hand, let us remember those children, in kindergartens in Memphis and across our nation and remember what this election is really all about: Them.

Yes, there will be talk during the campaign of budget surpluses and tax cuts, but it is really all about them.

And so, with those five-year-olds in mind, our first step in encouraging their dreams and unleashing their imaginations is electing Al Gore our next President.

For their sake, we can’t go back.

For their sake, we must go forward.

For their sake, we must build a future for everyone.

Thank you and God bless you.